Unlock the Box: The Movie 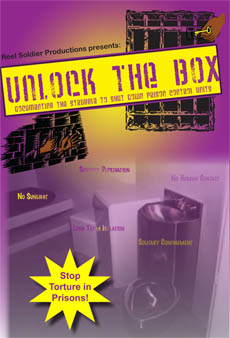 Unlock the Box is a movie documenting the struggle to put an end to long-term isolation in u.$. prisons that has been waged by prisoners and activists for decades. Starting from the premise that long-term isolation is a form of torture that serves no purpose except the state's oppressive aims at social control, Unlock the Box documents the many forms of struggle that this movement has taken over the years.

Each narrative is highlighted by the voices and artwork of current and former prisoners who have done time in control units. Also featured, is new research on the growth and extent of the use of long-term isolation in the united $tates. Throughout the movie there is a focus on lessons from struggle and analysis of the relationship between the prison movement and the global effort to put an end to imperialism in all its forms. The desired purpose of the movie is to continue to bring the realities of the torture going on in these prisons to a broader audience and to help create greater clarity on what needs to be done to replace a system of torture with a system that works in the interests of humynity.

Order online through Kersplebedeb for $14 plus shipping.

If you are interested in ordering DVDs in bulk to distribute please contact: MIM(Prisons)
Those who ordered bulk DVDs can download DVD cover art here. (for Amaray 7mm case)
Screenings
Anyone is free to screen Unlock the Box to whoever, whereever and whenever. We only require that you notify us of any public screenings. To obtain a copy (or many copies to sell at the event) to screen, send info about your screening to: MIM(Prisons)
Previous: Upcoming: 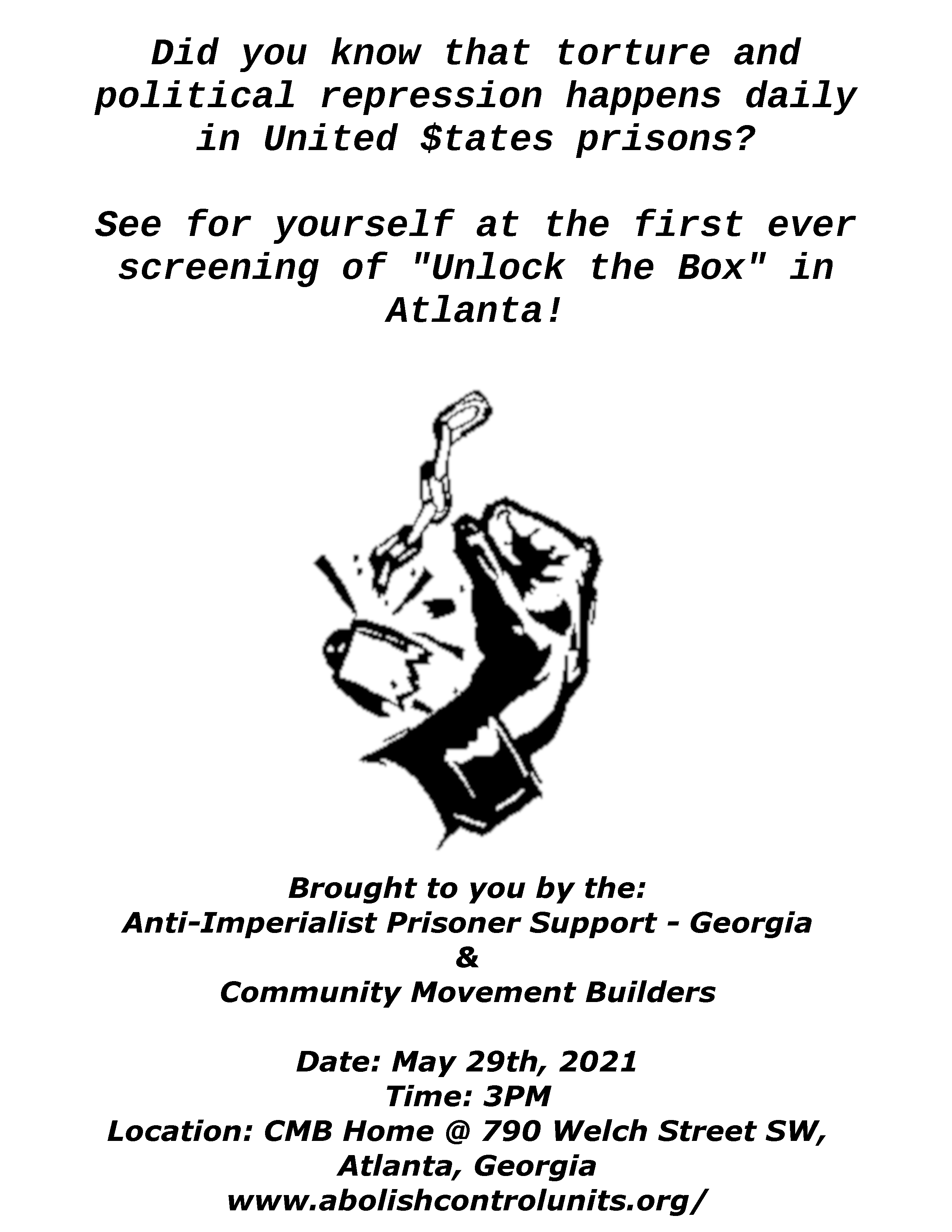 A film screening of the documentary Unlock the Box hosted by Anti-Imperialist Prisoner Support and Community Movement Builders. Discussion to follow with info on getting involved with local prisoner support organizing. 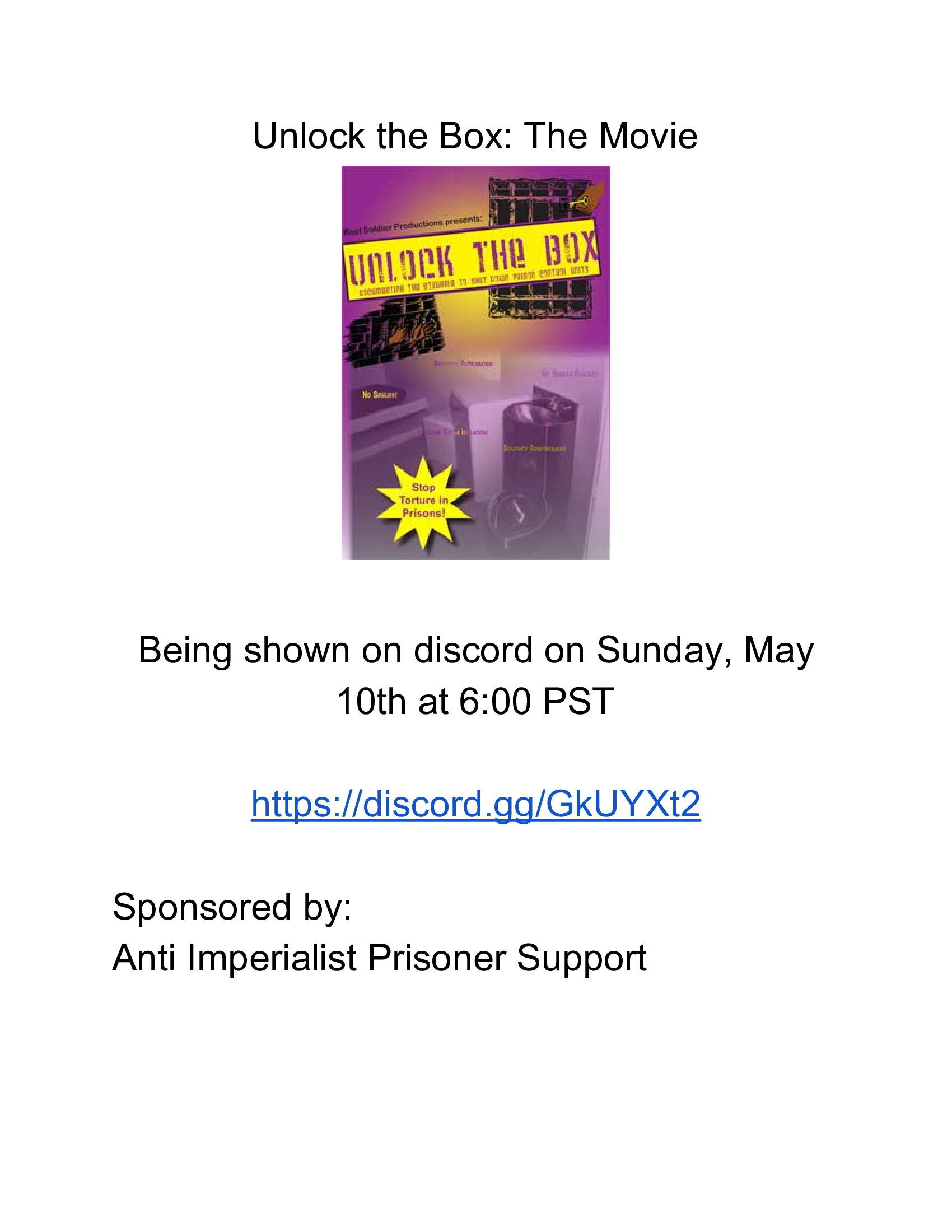 A film screening of the documentary Unlock the Box hosted by Anti-Imperialist Prisoner Support. Discussion to follow with info to support prisoner campaigns during COVID-19 pandemic. 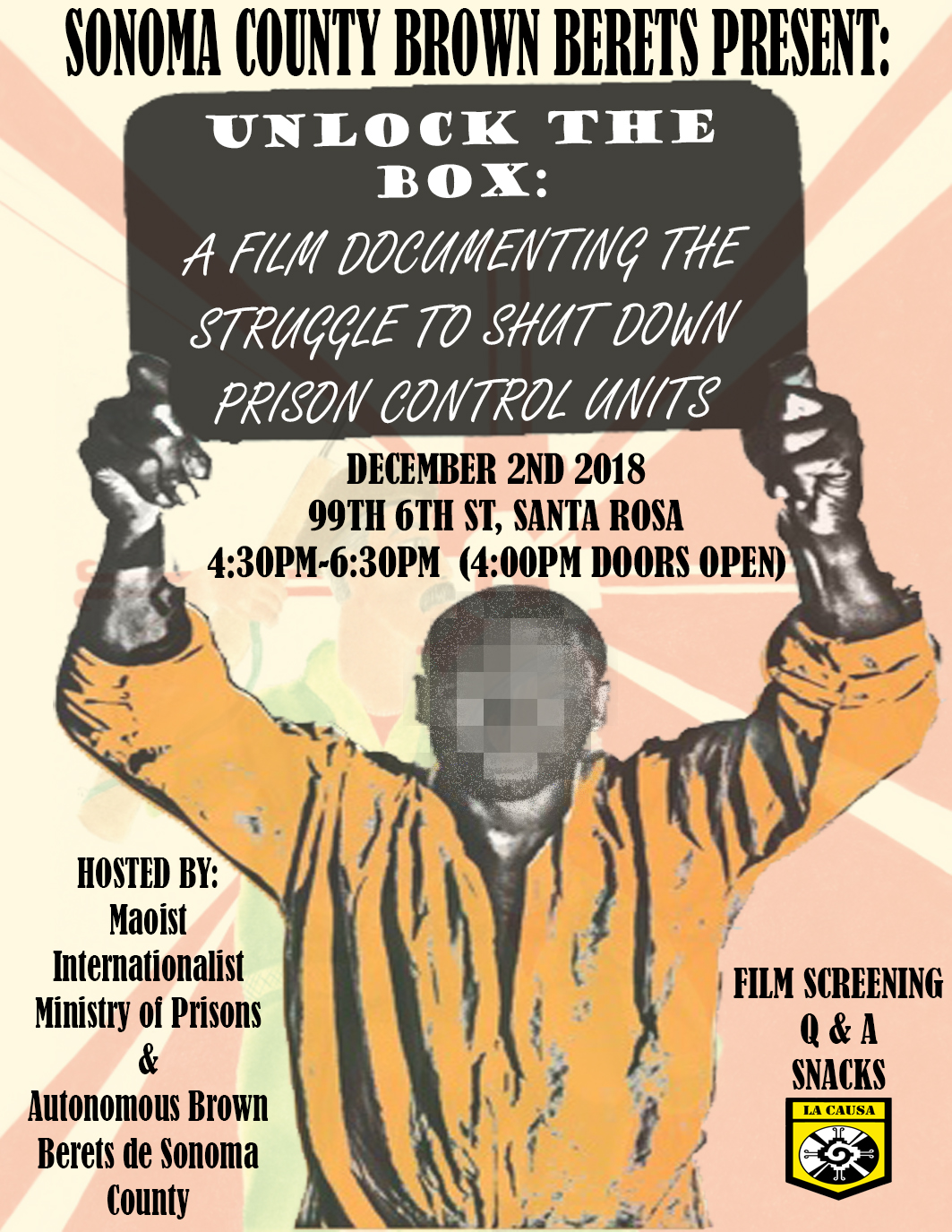 A film screening of the documentary Unlock the Box hosted by the Autonomous Brown Berets de Sonoma County and the Maoist Internationalist Ministry of Prisons. Questions and Answers and snacks to follow. 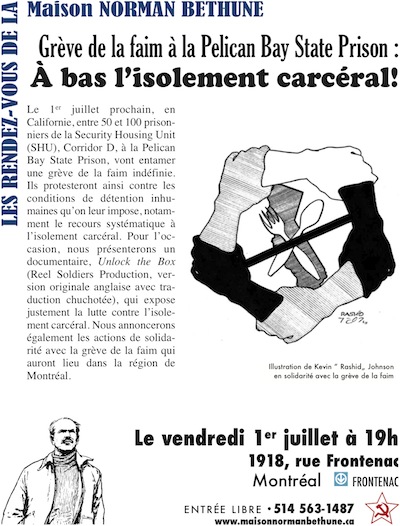 Pelican Bay Hunger Strike: Down With Isolation Imprisonment!
A film screening of the documentary Unlock the Box (Reel Soldiers Productions, in English with French whisper translation) about the struggle against isolation imprisonment. We will also discuss solidarity actions with the hunger strike taking place in Montreal. For more information: http://maisonnormanbethune.ca/node/304 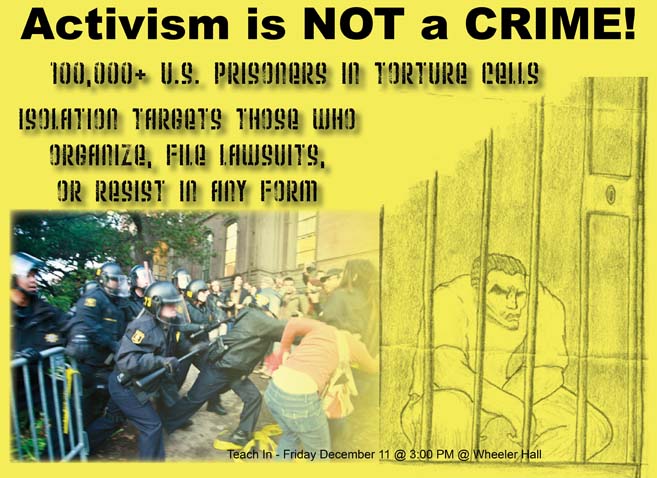 Workshop on Prison Control Units @ Live Week 2009
Students have taken over Wheeler Hall to "show that we can run our public university the way it should be - by the public." As the state cracks down on the students, come learn about what amerika does to activists in prisons across the country and discuss connections between the student and prison movements. Presentation will include portions of the film Unlock the Box.
Occupied Wheeler Hall
UC Berkeley Campus
Friday, December 11, 2009
3:00pm- 5:00pm 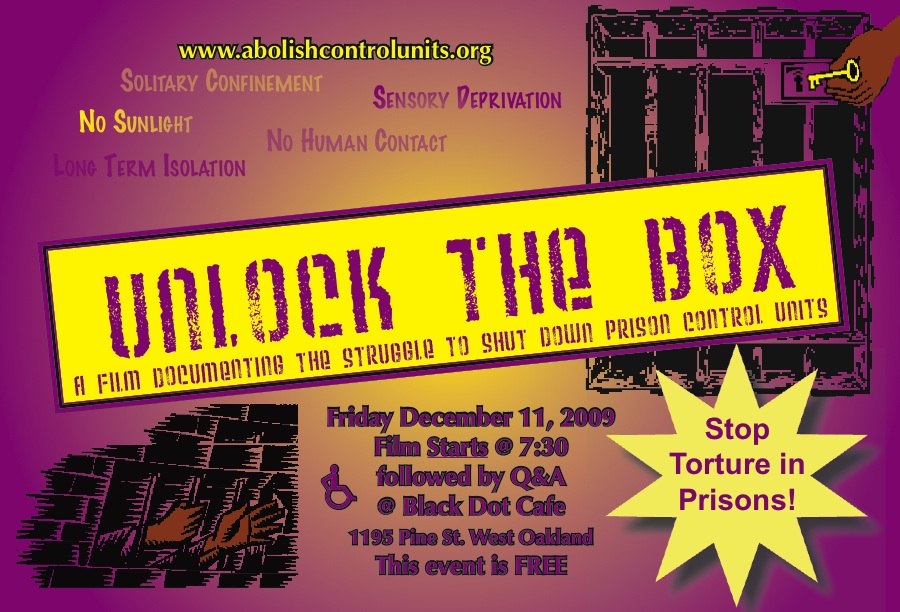 Listen to portions of Unlock the Box live on the air on Free Radio Santa Cruz 101.1 FM during the first hour of Free Our Minds. Free Our Minds airs every 2nd Saturday of the month from 6-8pm.
http://www.freakradio.org 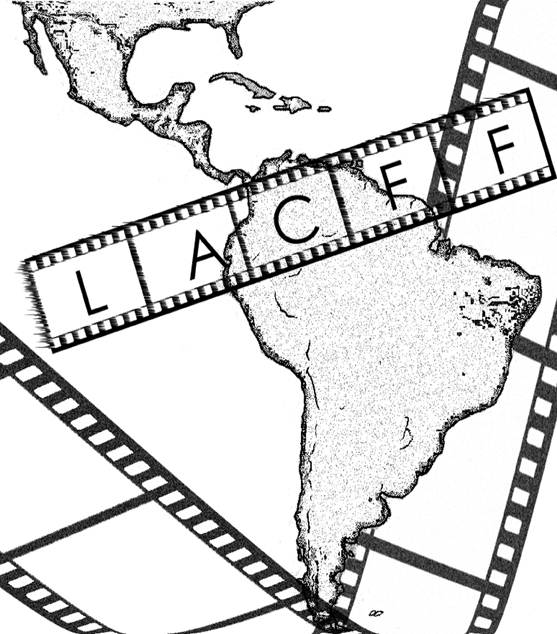 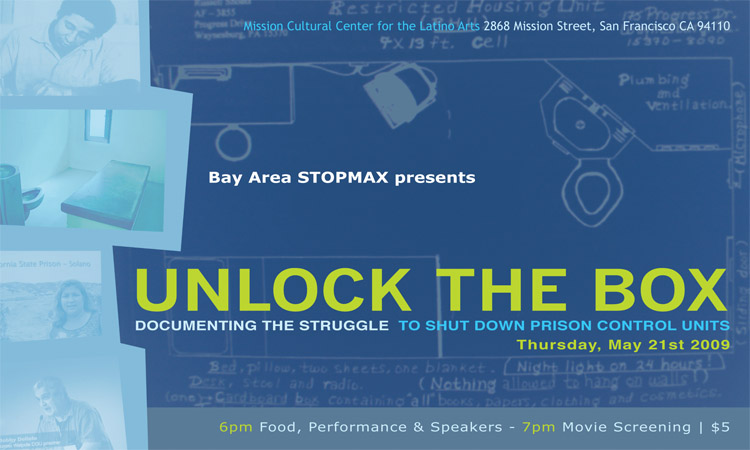 The Name Says it All (speaker: Julie) Control units, as part of the greater criminal injustice system, are used as a way to control certain populations. Working with the Maoist Prison Ministry, Julie has helped coordinate the longest running political education program for prisoners in the united states.

Survivor (speaker: Father Dom) A recent survivor of over 6 years in various Security Housing Units across California, Dom will share personal stories of the effects of long-term isolation on human beings.

Control Units beyond Super Max (speaker: Tommy Escarcega) While never being put in a "Super Maximun Security Prison", Tommy's experience in California women's prisons speaks to the use of long-term isolation far beyond the supermax prisons.

Sensible Housing Unit: AIR The Counter Narrative Society will present this touring performance project that merges irony, facts and audience participation to act, reveal and respond to the effects of prison control units.

Throughout the evening we will have food and drinks, visual art by prisoners and info tables from Bay Area groups providing a multitude of ways to get involved.

is a movie documenting the struggle to put an end to long-term isolation in U.$. prisons that has been waged by prisoners and activists for decades. Starting from the premise that long- term isolation is a form of torture that serves no purpose except the state's oppressive aims at social control, Unlock the Box documents the many forms of struggle that this movement has taken over the years.
http://www.abolishcontrolunits.org/movie

Bay Area STOPMAX is a collaborative group of prison activists and organizations working together with the national STOPMAX campaign to build public opinion around the idea that "solitary confinement" is a method of torture, with the goal of ending its use from the county jails to the super maximum security prisons within the U.S. to the military prisons around the world.